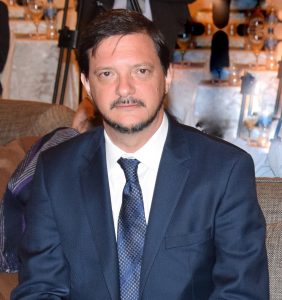 Dr. Manoel Galvao Neto graduated in Medicine at Bahiana School of Medicine and Public Health, Bahia, Brazil in 1989. After finishing the three years residency program at the 9 July Hospital in São Paulo (Digestive Surgery and Endoscopy), he returned to Bahia as invited Professor of Surgical Technique at Bahiana School from 1993-1998, becoming Coordinator of the Experimental Surgery Research Group and Assistant Professor from 1998 to 2000. At this period, he developed a training model in laparoscopic surgery with rats using conventional instruments, focused on medical students. With this model, he had trained four classes of 200 medical students. Also the model of training has been exported to others universities in Brazil, including Santa Casa of São Paulo, where it was adopted in the graduate and post-graduate program of Gynecology. On this matter, in 2003 he presented a Master degree thesis at São Paulo University about this training model which was published in peer-review journal. He is also a board certified specialist in Digestive Surgery by the CBCD (1992), Gastroenterology by FBG (1995) and Digestive Endoscopy by SOBED (2011). From 1993 to 2000, he was proctor and responsible for the implementation of the residency program in General Surgery at Cleriston Andrade Hospital in Feira de Santana – Bahia, Brazil. He was also the general Director of this hospital from 1996-1997.
From 1999 to 2000, he worked as assistant surgeon at São Rafael Hospital (Salvador, Bahia), where he was a surgical proctor and responsible for the implementation and team training of the esophageal manometry service. In 2001 he returned to São Paulo, working as coordinator of the esophageal motility Service at the Diagnoses of America Laboratory and concurrently worked as a researcher and consultant for Alacer Biomedica company, developing hardware and software on esophageal manometry and pHmetry which are current leaders in the market. He also developed training modules with interactive bases, which have been used by more than seven hundred doctors in the country. Recently he developed with industry high-resolution manometry and pH-impedance devices at the Esophageal Motility Laboratory in Mario Covas Hospital which has been authorized by the regulatory agency (ANVISA) to be used clinically
In 2002, he founded with Dr. Almino Ramos and Dr. Manoela Galvao the Gastro Obesity Center, and was the scientific coordinator, chief endoscopist and played a key role in developing training models. This is probably the most successful bariatric surgery unit in Latin America with more than ten thousands bariatric procedures performed to date. In this area, he developed training models for laparoscopic bariatric surgery and multidisciplinary teams in partnership with Ethicon Endo-Surgery. To date more than 500 surgeons and 100 multidisciplinary team members from Latin America (including Brazil), Portugal, Spain, Japan and India have been trained on those models. He developed the endoscopic sub-specialty of “Bariatric Endoscopy” with Dr. Josemberg Campos from Federal University of Pernambuco - UFPE). Our experience has been published in more than 40 peer reviewed articles and 3 books written in Portuguese and Spanish.
During the same period he pioneered in Brazil small bowel capsule endoscopy in 2001, esophageal capsule in 2006 and colon capsule in 2007. He performed the first endoscopic gastric banding removal in Brazil in 2004 and the first air-filled intragastric balloon implants in 2006. From 2006 to date he performed with Dr Almino Ramos the first NOTES research in animals in Brazil, the second world NOTES (transgastric cholecystectomy); the first largest series of human transvaginal cholecystectomy and the world first human transvaginal sleeve gastrectomy procedure. From 2008 his group has focussed to diabetes surgery, Single Port laparoscopic procedures and the development of LGCP (Laparoscopic Greater Curvature Plication) as a new bariatric procedure with the initial clinical experience already published. He is an active participant on the development of EndoBarrier (endoscopic endoluminal duodenal-jejunal bypass) since its “first in man” implant, being the proctor for trials in Brazil, Chile, Netherlands, Germany, Austria, UK and US. In 2010 he participated in a new “first in man” trial and first chronic trial of electrical stimulation of the lower esophageal sphincter in Chile in collaboration with Endostim. In 2011 he participated as an investigator and proctor for Apollo EndoSurgery developing the first OUS series of endoscopic RYGP revisions with the Apollo OverStitch. From 2013 he helped develop (as investigator and proctor) the Endoscopic Sleeve Gastroplasty – ESG, from its first-in-human series in Panama to the initial series of Spain and Turkey and the first case in Spain and Germany
Since 2011 he has been an invited speaker and committee member for SAGES, ASMBS, IFSO, ASGE. He has given guest lectures in Brazil, Chile, Argentina, Colombia, Chile, Mexico, USA, Spain, France, Italy, Netherlands, Germany, Turkey, Korea, Hong Kong, Malaysia, China, India and Kuwait. He serves as a journal reviewer for Obesity Surgery, SOARD and Surgical Endoscopy.
From published work, his Scopus ranking is 23 (at least 23 articles cited 23 times on peer reviewed papers) and at least 5 papers were cited more than 100 times, the LGCP paper was ranked among the 10 most popular in Bariatric Tmes and the Endoscopy journal acknowledged the first NOTES large series published in 2008 as one (7th in rank) of the papers that significantly raised the impact factor of the journal in 2010. His participation on the “International Sleeve Gastrectomy Expert Panel Consensus Statement” has been cited 232 times.
Since 2013 he has been Clinical Associate Professor of Surgery at Florida International University - FIU and Affiliated Professor of Surgery at the ABC Medicine School (Santo Andre, Brazil)
In 2015 he was awarded with the "Surgical Innovator Award" by the American Society of Metabolic and Bariatric Surgery; the first of its kind and the first to a non-American by this society