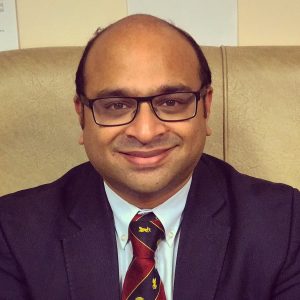 Mr Menon has been a Consultant Bariatric Surgeon with Phoenix Health, and a Consultant General/Upper GI Surgeon at Wirral University Teaching Hospital since 2016.

He studied at Downing College, University of Cambridge, obtaining an MA in Neuroscience, and graduating in Medicine in 2001. After completing basic surgical training at the Yorkshire School of Surgery, he undertook research with two pioneers of Bariatric surgery in the UK; Professor Michael McMahon and Simon Dexter. This eventually resulted in the publication of the longest current series of Sleeve Gastrectomy in SOARD in 2012.

Mr Menon then pursued higher surgical training in General, Oesophagogastric and Bariatric surgery in London and Manchester, eventually being awarded Fellowship of the Royal College of Surgeons in 2014. He undertook a number of research projects with Professor Basil Ammori at Salford Royal Hospital, looking mainly at long term comparisons between Sleeve and Bypass, Ambulatory Care in Bariatric Surgery, and Meta-analysis of outcomes of Bariatric Surgery in the Super-obese. These resulted in numerous international and national presentations, the award of a poster prize at the IFSO world congress in 2012, and a ChM degree with distinction by the University of Edinburgh in 2014.

Following completion of surgical training in 2015, he was appointed to the Phoenix Health Fellowship in Bariatric Surgery with another Bariatric pioneer; Professor David Kerrigan. Working primarily in Aintree University Hospital, he gained high volume experience with Bypass, Sleeve, and Revisional surgery. His work on mortality risk reduction with 2-stage bypass was presented at the BOMSS prize session in 2016.

As a Consultant, one of his special interests has been the management of biliary complications in Bypass patients, and has set up a Laparoscopic Transgastric ERCP service with a team of HPB gastroenterologists. He has contributed three chapters to the forthcoming Cleveland Clinic Textbook of Bariatric Complications. His research team have produced a number of abstracts, and who were recently honoured with a number of prizes at a regional meeting. He maintains a strong commitment to educating the next generation of surgeons, and was recently elected to Membership of the Faculty of Surgical Trainers at the Royal College of Surgeons of Edinburgh.