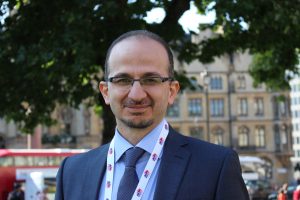 Mr Ali Alhamdani is a Consultant Bariatric Surgeon working in London, UK.
He was awarded his medical degree at the University of Baghdad, Iraq in 1996. After finishing his medical degree, he started his surgical training in the UK in 1998. After attaining his MRCS in 2002 Mr Alhamdani completed a Masters Degree (MD) in the molecular changes occurring in the cells in Barrett’s oesophagus, in 2006. He attained his FRCS in 2010 and after finishing his higher surgical training, Mr Alhamdani was awarded a fellowship in bariatric surgery through attaining one of the first fellowships programs in UK for obesity surgery, in Sunderland.
He has performed over 1000 weight loss procedures to date.
He provides the full range of obesity surgery procedures, including gastric bypass, mini gastric bypass, gastric band, sleeve gastrectomy and revisional bariatric surgery. He performs over 100 weight loss procedures per year.
He worked internationally to help develop bariatric surgery in different part of the world. In 2012 Mr Alhamdani set up the first multidisciplinary approach to bariatric patient in Iraq and performed the first gastric bypass and sleeve gastrectomy in the Medical City in Baghdad. He continues to visit countries in the Middle East to help the progression of safe and effective bariatric surgery in that part of the world
in many countries