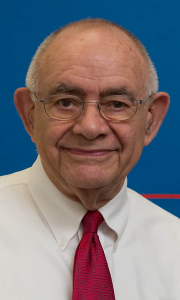 Walter J. Pories, MD, FACS is Professor of Surgery, Biochemistry and Kinesiology at East Carolina University (ECU), United States. He received his MD with Honors at the University of Rochester, New York where he also completed his surgical training in general and cardio-thoracic surgery. Following his appointments at the University of Rochester and Case Western Reserve University, he became the founding Chairman of Surgery at ECU (1977 – 1990). He is currently the Director of the Metabolic Surgery Research Group at ECU.

Dr. Pories research interests have been in nutrition, pediatric and bariatric surgery. His research included the first report that zinc is not only an essential element for plants but also animals. He described the role of the element in wound healing, development and the growth of cancers. During these studies he participated in the fortification of animal feeds as well as the addition of trace elements to parenteral and alimentary formulations

He was also the first to delineate the full and durable remission of type 2 diabetes following the gastric bypass operation. To improve the outcomes from bariatric surgery, he founded the Surgical Review Corporation (SRC) that developed the international Bariatric Surgery Centers of Excellence Program as well as developing the BOLD database that led to a reduction of the 90 day mortality in the US from about 10% to 0.3%. He was also the first to develop a postgraduate curriculum for graduate surgical education, published through four editions.

His current research interest is the molecular explanation why type 2 diabetes resolves within a matter of days following bariatric surgery His group has had continuous funding from the NIH for over three decades.

He retired from the US Army with the rank of Colonel after 24 years of service with the Legion of Merit. He also received a Presidential Citation for the performance of the regiment under his command in the first Gulf War.