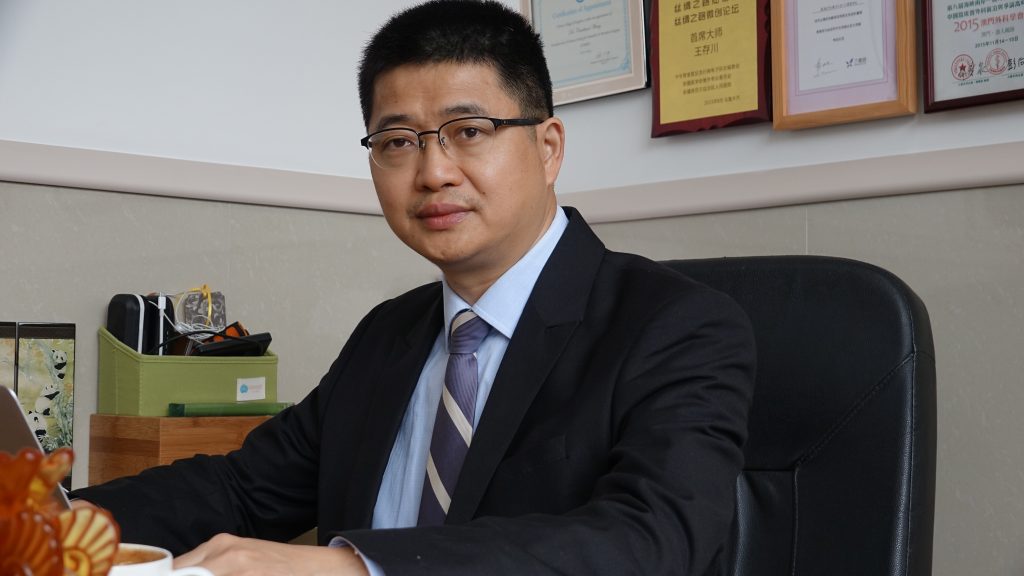 Professor Cunchuan Wang was born in Sichuan Province in China, a beautiful hometown of panda. He had worked in Department of General Surgery in Xuanhan People's Hospital for two years after graduated from Luzhou Medical College (now named as Southwest Medical University) in Sichuan Province, China. After his postgraduate study in Jinan University, Professor Wang stared working as a laparoscopic surgeon in the Department of General Surgery, the First Affiliated Hospital of Jinan University in Guangzhou, China. Later he obtained his PhD Degree in Huazhong University of Science and Technology Tongji Medical College. Professor Wang is the pioneer of laparoscopic surgery in China and he was a visiting scholar in Mount Sinai Medical Center in the USA in 2000, where he met Professor Michel Gagner for bariatric surgery.

Professor Wang initiated the founding of the Chinese Society for Metabolic and Bariatric Surgery (CSMBS) in 2012 with experts from Shenyang and Shanghai. He is currently the President of CSMBS, Vice-President of the First Affiliated Hospital of Jinan University and Director of the Department of Metabolic and Bariatric Surgery (International Bariatric Center). He is also the expert received special government allowances of the State Council in China. He has started doing metabolic and bariatric surgery since 2000 which is the first surgeon performed laparoscopic Roux-en-Y gastric bypass (LRYGB) in mainland China. He performed LRYGB for a male with BMI 99 who was regarded as the man with highest BMI in China. He also first introduced the concept of “Precise metabolic and bariatric surgery” which resulted in better surgical outcomes and safety. In his center, procedures mainly performed are LRYGB, LSG, reduced ports or single port LRYGB or LSG and different kind of revisional surgeries, etc. These all contribute his center the largest case volume center in China.

Professor Wang established the first Chinese journal about the clinical and basic research of metabolic and bariatric surgery named Chinese Journal of Obesity and Metabolic Diseases and he is the Editor-in-Chief. He is also the Editor-in-Chief of the first Chinese textbook in bariatric surgery named Bariatric and Metabolic Surgery. The content of metabolic and bariatric surgery was first included in the textbook of Chinese medical undergraduates in 2018 by Professor Wang. He has also contributed chapters in other books related to laparoscopic surgery, bariatric surgery and thyroid surgery. He has published more than 300 articles in Chinese and English peer-reviewed journals. He has supervised more than 100 master and doctoral postgraduate students and fellows who were from the nation and all over the world.

Professor Wang is the international member of the International Federation for the Surgery of Obesity and Metabolic Disorders (IFSO) and the American Society for Metabolic and Bariatric Surgery (ASMBS). He is also the Executive Board Member of the IFSO-Asia Pacific Chapter (IFSO-APC). He has been invited to deliver presentations or live surgery demonstrations around the world, eg. the United States, United Kingdom, Germany, Japan, France, South Korea, Malaysia, Vietnam, Turkey, Singapore, India, Austria, Egypt, Canada, Sweden and Brazil, etc.

Professor Wang began working on laparoscopic surgery in 1991, focusing on minimally invasive surgery for obesity and related metabolic diseases, thyroid disease, gastrointestinal carcinoma, hepatobiliary disease, and diseases of pancreas, spleen and hernia, etc. Until 2017, he has performed more than 100 kinds of laparoscopic surgeries independently in more than 10000 cases that is one of the highest case volume surgeons in mainland China. These including some advanced procedures such as laparoscopic pancreaticoduodenectomy and laparoscopic right hemihepatectomy. He also performed the first case of endoscopic thyroidectomy for hyperthyroidism, complete laparoscopic radical gastrectomy for gastric fundus and cardia cancer, laparoscopic partial hepatectomy for the treatment of intrahepatic cholelithiasis, laparoscopic total colectomy, and laparoscopic Roux-en-Y gastric bypass for obesity and metabolic disorders in mainland China.

Professor Wang first introduced endoscopic thyroidectomy via areola of breasts approach (ETABA) in 2005 and endoscopic thyroidectomy via oral vestibular approach (ETOVA) in 2011. He has performed more than 5000 cases in endoscopic thyroidectomy which is currently the largest number of cases in the world. Professor Wang has made great contributions to the popularization of laparoscopic surgery in China since 1997. He has given presentations in more than 500 academic conferences. He has been invited to more than 400 hospitals in China to assist them in various minimally invasive operations, such as metabolic and bariatric surgery, general surgery, thoracic surgery, urinary surgery and gynaecology, etc. He has begun focusing on metabolic and bariatric surgery since 2013.

Professor Wang and his wife, Dr. Li Wang, met in high school, have a daughter who is currently working as an accountant in Australia. Professor Wang liked Chinese Kung Fu when he was young, and he has a deep understanding of Chinese history. He also has a strong interest in the history and culture of different countries. He likes to visit the local historical sites and museums when he travels abroad.