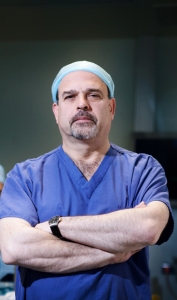 Freddie Hamdy joined the University of Oxford in 2008 as Nuffield Professor of Surgery and Head of the Nuffield Department of Surgical Sciences, Professor of Urology, and Honorary Consultant Urological Surgeon, as well as Fellow of Balliol College. He trained in Surgery and Urology at Liverpool, Sheffield and Newcastle, and was founding chair of Urology, Director of the Section of Oncology and of the Division of Clinical Sciences at Sheffield. He has introduced a robot-assisted surgical programme to Oxford in 2009. He leads the Oxford NIHR BRC (Biomedical Research Centre) Surgical Innovation and Evaluation Theme, and is co-Director of the first Surgical Intervention Trials Unit in the UK. His research activities include clinical, translational and basic science programmes on the biology of urological malignancies. He is Chief Investigator of many studies including the HTA NIHR ProtecT trial on prostate cancer, the largest of its kind worldwide. He was appointed Director of the Division of Surgery and Oncology at the Oxford University Hospitals NHS Foundation Trust in November 2010. This is Oxford University Hospitals largest Division with over 2000 staff, mainly based on the Churchill Hospital site, encompassing a range of surgical and oncological activities with additional specialties such as Haematology and Gastroenterology. He was elected Fellow of the Academy of Medical Sciences in 2007 and NIHR Senior Investigator in 2010.