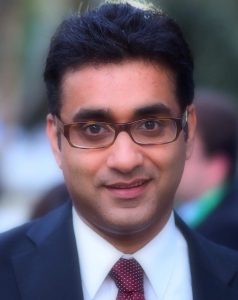 He was educated at Christ Church, University of Oxford and Royal Free Medical School, University of London. At medical school he was awarded  1 scholarship, 21 Prizes, 4 Distinctions and was Proxime Accessit to the 1997 University Gold Medal.

In 1998 he started his surgical training in General/Vascular Surgery at the Royal Free Hospital under Professor George Hamilton CVO, former Serjeant Surgeon to the Queen. In 1999 he continued his training at the John Radcliffe and Churchill Hospitals, University of Oxford training in General Surgery/Renal Transplantation & Urological Surgery under Professor Sir Peter Morris AC FRS, Past President of the Royal College of Surgeons of England (2001-2004) and Professor David Cranston. From 2001 – 2004 he undertook a DPhil (PhD) based jointly at the Wellcome Trust Centre for Human Genetics, University of Oxford and the Nuffield Department of Surgical Sciences, John Radcliffe Hospital, University of Oxford funded by the Royal College of Surgeons of England Research Fellowship and British Heart Foundation Studentship. During this period he was also appointed Honorary Vascular Surgery Registrar at the John Radcliffe Hospital.

He has given/contributed to over 70 national and international research presentations and has given 30 invited presentations. He has 28 publications to date in journals such as Obesity Surgery, SOARD, Canadian Journal of Surgery, American Journal of Clinical Pathology, British Journal of Urology, Journal of Bone and Joint Surgery, European Journal of Vascular and Endovascular Surgery & BMJ Case Reports. He has written 6 book chapters in the field of bariatric and metabolic surgery.

Laparoscopic gastric plication for the treatment of morbid obesity (IP988) 2012

Endobarrier gastrointestinal liner for treatment of obesity and diabetes (IP986) 2012

B Braun Aesculap Scholarship (awarded by the ALSGBI)

Certificate of Merit in Anatomy

Certificate of Merit in Pathology

Certificate of Merit in Psychology

Certificate of Merit in Clinical Pharmacology and Therapeutics